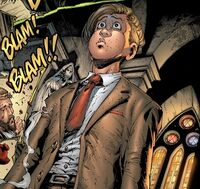 Mark Lucas was a model boy and citizen. When Billy Kincaid took possession of his body, he entered a church and murdered several people inside. Even though he had no control over his actions, his body was still held accountable for its crimes. He was sent to hell and served as one of Billy's ghosts.[1]

Retrieved from "https://imagecomics.fandom.com/wiki/Mark_Lucas?oldid=67103"
Community content is available under CC-BY-SA unless otherwise noted.