Start a Wiki
Mark of the Beast 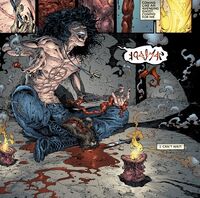 Mark of the Beast was a well known and respected criminal in New York City. He practices Occultism and brought a young woman named Renee back to his house where he prepared a spell. Spawn arrived to stop him as he placed a Binding spell to capture him.[1] Mark informed Spawn he wanted to trade places and become the new Hellspawn. In return, Spawn shows him what Hell was really like. The torture, famine, and the destitute souls. Mark explained he was dying of a terminal disease and wanted to rule eternally. Spawn healed him of his disease but was unable to dissuade him from his ambitions. Spawn throws him off the roof and kills him to save him from his madness and send him to hell for real. [2]

Retrieved from "https://imagecomics.fandom.com/wiki/Mark_of_the_Beast?oldid=67088"
Community content is available under CC-BY-SA unless otherwise noted.