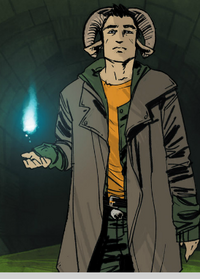 Marko is the loving husband of Alana and father of star-crossed baby Hazel. He fights to protect his family and wishes to avoid the war between Wreath and Landfall that has stretched across the galaxy.

Marko was born on Wreath, a moon orbiting the planet Landfall, to Klara and Barr. Growing up, Marko lived a decent life. One day, his parents took him to see the final battle on Wreath and Landfallian soldiers. Marko learned to never forget the sacrifice the Landfallians made.[1]

Marko used violence against another small girl when she burned his dog's tail. In retaliation, Barr beat Marko to teach him violence wasn't always the answer.[2]

As Marko grew older, he met a girl named Gwendolyn to whom he had become engaged. She gave him translator rings, worn by her grandparents because they spoke different languages, to remember her by after enrolling in the Wreath militia. Marko became a fierce warrior and killed many of their enemies. During one of the battles on Cleave, he surrendered and was taken prisoner.[3]

From there, he met Alana, and the two quickly fell in love. At first, Alana was annoyed by him but eventually warmed up to him. She began sharing her favorite stories from a book with him written by D. Oswald Heist. After finding out he was to be executed, Alana freed him. The duo fell in love and she became pregnant with his child. From there, the duo became fugitives from both Wreath and Landfall and both sides attempting to grab a hold of their half-breed child.[4]

After the birth of their daughter, Hazel, they soon found themselves aggressively pursued by the Wreath Militia and Landfall Coalition for defecting from service. They both escaped and picked up a map that promised a Rocketship Forest to help them leave. While the map was accurate, they found they couldn't escape the war as troops all over the forests of Cleave were fighting.[5]

While continuing their escape, Marko and Alana encountered The Stalk in the woods. Marko was mortally wounded by her barbed tongue in the shoulder and was close to dying due to blood loss.[6] His wife agree to let their child be bonded with a local Horrors, Izabel, in order to get the necessary ingredients to save his life, snow. As he was on the edge of delirium, he uttered his ex-fiance's name, Gwendolyn shocking this current wife.[7]

Upon reaching the mountain top with snow, Marko was able to heal himself. He soon found the wrath of his wife grilling him about Gwendolyn and how he could have kept the secret. He informs her that it wasn't going to work out and that he lovers her. He also informs her that the rings they wear are her's and that she may want them back.[3]

The could were soon found by the Landfall Coalition. The soldiers called in their location but were ordered to kill the two fugitives. When Alana was shot by a deflected bullet, Marko broke his vow of non-violence and entered a berzerker rage to save family. He was only brought out of it by Alana's Heartbreaker shot.[8]

Finally arriving at Rocketship Forest, they were shown a wooden ship by Izabel. She informed them they would need to sacrifice something important to leave and Marko smashed his sword which had been a family heirloom for years. As they took off in the shop, they were suddenly boarded by Marko's parents, Barr and Klara. His parents thought he was in trouble since his sword was broken and banished Izabel to a nearby planet in the scuffle. Marko quickly showed them that he had married Alana and had their child Hazel together. Realizing he needed to rescue Izabel, he took one of their Crash Helms and went to the planet with his mom to save her.[1]

Upon arriving, they encountered a cyclops who attempted to smash them. Klara and Marko teamed up to perform a binding spell and learn that the planet was actually a gigantic egg that would hatch soon and attempt to absorb them.[9]

Upon rescuing Izabel, they teleported back to the ship. When the Timesuck started pulling them towards it, Marko grabbed the Crash Helms to burn in the ships kiln and escape from Timesuck. However, the speed was too much for the ship and it began to rip the ship apart. Marko's father, Barr, used magic to bind the ship together. When Marko returned upstairs, he was devastated to find his father had died of heart failure due to the exertion put on his body.[10] Marko continued to express sadness and didn't smile for weeks to come.

However, upon arriving on Quietus, Marko laughs for the first time in weeks as they forgot about the war having been united with their author, Heist. He soon warned them they'd need to leave as he's frequently inspected and he wouldn't ant them to get caught.[11] They failed to leave soon enough and soon found themselves trapped in the attic as Prince Robot arrived and was interrogating Heist about his propaganda book.[12]

When Klara went downstairs to confront the Prince, Alana and Marko headed to the top of the lighthouse to see if they could escape. Marko urged Alana to jump but she protested that her wings won't work. When Gwendolyn arrived and asked for the ingredients to save her new love's life, Marko informed her the spell only works on people from Wreath. Gwen attempted to murder Alana with her lance but Marko pushed Alana off the roof. Alana suddenly re-appeared using her wings to fly and disabled Gwen giving them a chance to escape. Marko told Alana that he always believed in her and knew the wings would work when she needed them.[13]

A year later, the group headed to Gardenia, a planet that had not yet picked a side and would be good for the duo to lay low. Marko would still head out into public, but with a horrible disguise for himself. He taped Hazel's wings down so everyone thought they were from Wreath.

At a park, Marko met a dance instructor named Ginny.[14] The two became close as Ginny and Marko began flirting with each other and tensions at home with Alana continued to rise.[15] Things erupted when Marko called Alana out on doing drugs around their daughter. He lost his anger and threw a bag of groceries at Alana and was kicked out of the home.[16]

Marko headed to Ginny's house and the two almost shared a kiss when he spotted one of Hazel's dolls at her home. He knew she wouldn't be able to sleep without it and rushed home to return the doll. However, he was too late and arrived just in time to see the Wooden Ship take off.[17]

Marko soon teamed up with Prince Robot IV to find Alana and the Prince’s Son. The traveled to Quietus to find Ghus, the herder who sold them Friendo. Ghus tells them he can track his herd through a psychic link but hasn’t tried to head across the galaxy before.[18]

While they travel on Stalk's Skullship, Yuma gives Marko tainted Fadeaway that nearly kills him. He thanks her for the near death experience and told her that it brought him closer to understanding his wife. He also had visions of his violent upbringing and a time when his normally peaceful father beat him.[2]

When they are suddenly approached by a warship from the Robot Kingdom, the group sees a violent side of Marko come out as he orders them to fight the ship head-on even though it dwarfs their ship. The Prince teleports them out of there to save their lives against Marko’s wishes.[19]

Marko awakens from the crash. Rather than help the Prince, he grabs his shield and sword to find his family. Outside, he finds Alana and they embrace after having not seen each other. However, they are too late as the Last Revolution take off with their daughter.[20]

On Quietus, Marko and Alana convinced Prince Robot, now de-throwned and going by the name Sir Robot, to help them break into the prison to save their daughter. They threatened to reveal their location to King Robot and the Prince agreed to help them.[21]

Marko and Alana made a vow, to not touch each other romantically in a way that would make another child until they found the one they lost. Together, they spent years searching for Hazel. They eventually found themselves on Variegate. They searched through ship manifests and found one that described their child and Klara. However, it says they were brought to Landfall. They knew they'd need help getting in past the robots, so they headed back to Quietus to ask Prince Robot, renamed Sir Robot, for help in passing the guards.[22]