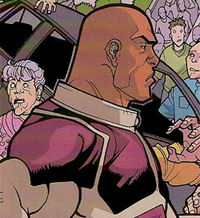 Black Samson is a comic book superhero in the Image Comics series Invincible. His first appearance was in Invincible #6.

Samson is a member of the Guardians of the Globe. For a time, Samson lost his powers and was let go from the team. Desperate to be a superhero again, he went to Art the tailor to obtain a power suit. When the suit was stolen and the original Guardians were killed, he was initially the prime suspect. However, it was established that he had not left his home for weeks. The Guardians' funeral was disrupted by Samson's butler Sanford, who had stolen the suit to kill the Guardians as revenge for his employer.

Samson was eventually recruited into the new Guardians of the Globe, wearing the power suit. During a battle between Invincible, Titan, the Guardians and Machine Head's syndicate, Samson was seriously injured by Battle Beast, along with Bulletproof. He was comatose for several weeks. Meanwhile, in order to curb the side effects of using her powers, Monster Girl wore Samson's power suit on missions. During a fight with the cosmic villain Omnipotus, the power suit was destroyed and Samson revived, his powers returning to him greatly augmented, allowing him to turn the tide in the heroes' favor. His powers have subsequently returned back to their normal levels.

When Robot took over the world, Black Samson was the first superhero he killed.