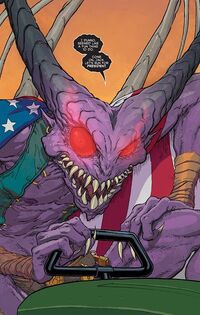 Put yourself in the hands of your old pal Marlinspike.

Marlinspike promised Jack Northworthy his deepest desire, to become the president of the United States of America, in exchange for signing a contract with him.[1]

Later, Marlinspike handed Jack a gun. Later that night Jack found out that Honeycutt had paid his way to beat Jack. Marlinspike stabbed Honeycutt through the back and Jack stood there with the gun in his hand. Honeycutt's associates broke into the room and discovered Jack standing there with the gun. They at first were frightened and were going to call the police, but Jack reminded them he was the only chance they had at winning the race. They agreed to work for Jack as Marlinspike stood behind him.[3]

Marlinspike continued to require human sacrifices. Jack thought he wanted him to kill Donna, however, he couldn't when she said she'd continue to stand by him. Jack decided to kill his father and Marlinspike agreed to continue to help him now that more people have been murdered.[4]

Retrieved from "https://imagecomics.fandom.com/wiki/Marlinspike_(Citizen_Jack)?oldid=55899"
Community content is available under CC-BY-SA unless otherwise noted.