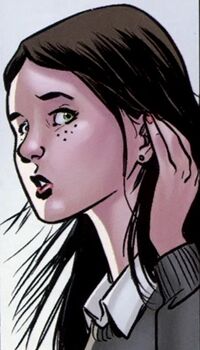 Martha Ann Cypress, or Em, has a secret. She died a long time ago. On Christmas Day, Em spent significant time texting secretly her professor that she was sleeping with. After disappearing for several days, she returned with no memory of her death. Only that she was afraid and running. When she woke up two days later, she was found floating in the river.[1]

Over the next few months, she frequently found herself drawn back to the river to look at the spot where she awoke.[2] The only mark upon her body was a scar on her forehead.[3]

Em was spotted by her sister, Dana Cypress, when she was on her way to her first RCAT case. Things turned sour when Em was stabbed through the chest in an altercation. However, being a reviver and unable to die, Em survived to reveal she was a reviver to her sister and saved her from their attacker, Arlene Dittman. Em made Dana promise not to tell their father, Sheriff Wayne Cypress.[2]

As they left the scene, she asked Dana to find out who originally killed her.[3] After being dropped off at home, she was berated by her father who had already discovered she was at the crime scene. He asked to stay in. Em sneaked out anyways to head to bar where she spotted her professor and lover Aaron Weimar. She blew off steam by engaging in a bar fight, but was secretly attempting to get the attention of Aaron.[3]

Later, Aaron approached Em after class. He told her the fight was inappropriate since he was in front of his wife. Em became upset that he is more concerned about his appearance with his wife than her well-being and walked out of class.[4]

Blaine Abel and May Tao Discover the Secret

Later, May Tao stopped by Rothschild Police Department Headquarters for questioning. She ran into Em and dropped her two cell phones. Em spotted a picture of the Creeps on her phone before slyly returning it to her.[5]

Later, Em was walking through the woods when she was suddenly startled by a Creep coming to attack her.[5] Em escapes to find May Tao tied up in front of an occult circle. She uses a ring from the circle to lure the Creep into nearby water which appeared to destroy it. Em released May but they were soon chased by Blaine Abel who had created the circle and tied up May Tao to lure the Creep. When Em was shot by Blaine's arrow, May was shocked to learn Em was a Reviver and healed instantly. After escaping and causing a crash that severely injured Blaine to put him in the hospital, May began to trust Revivers more and questioned her resolve break the story.[6] Martha Ann Cypress returns to the river where she died. She spots several Creeps huddled together below, but upon blinking realized they were men in hazmet suits.[7]

Dana talked with Em about her phone calls with Aaron Weimar on Christmas Day. She asked why she didn’t tell her the truth and they end in an argument.[7] Dana was driving Em back home when she got a call from Ramin that he needed help. Dana dropped Em off at her house temporarily to check on Ramin.

Em later returned to where the Check brothers were digging a grave for their latest victim, a Reviver named Tommy. She was about to shoot Tommy in the head to put him out of his misery but a Creep jumped in front and possessed his body. Tommy then self-immolated into an ashy smoke.[9]

Em later heads to a bakery where she meets Jeannie Gorski, a fellow Reviver. She tells Em to meet her at Saint Mark's where Revivers meet weekly.[10]

Em showed up to meet with Jeannie Gorski. She volunteered to help put body parts back where they belong after the attempted body-part smuggling incident. At the event, Em met Jordan Borchardt, a young girl who is also a Reviver.[11]

The next night, on Valentine's Day, Dana prepped to go on an official date with Ramin. She asked Em to baby sit Cooper and Jordan for her while she was out. Em agreed and when Cooper went to bed, Em and Jordan talked about not needing to sleep and seeing the ghosts in the woods as Revivers. Jordan tells her they sometimes beckon her to come to them.[12]

Later, Em drove Jordan home. When a Creep suddenly appeared in the backseat and attacked them, they swerved of the road and crashed. Em tried to call Jordan back to the car but Jordan kept running away. Em told the Creep she knew they came from the Reviver’s bodies, and upon returning to it the action kills the person. She pleaded for it to leave Jordan alone as she was too young to go. Em sneaked up on the Creep as it picked up a doll in a pretty red dress, same as Jordan’s mother the day she died, and tackled it into the water causing the Creep to disappear. Jordan became distraught as she wanted to die by the Creep.[13]

Em headed to Aaron Weimar's office due to the stress. She stripped of his clothes and told him she just needed to cuddle with him and they lay on the floor together.[13] As she left the next day, Lester Majak spotted her leaving with wet shoes.[14]

Dana headed to meet with Em. She told her May Tao had been snooping around and asking questions at Nikki's work. Em denied knowing her but agreed to tail her and find out more information of what she was looking for. In the meantime, Dana agreed to continue researching who killed her and was investigating Aaron Weimar.[1]

Em took a detour to the hospital and asked if they had a Jordan Borchardt. They said she wasn't checked in, but she suddenly spotted May Tao and began trailing her.[1] Em lead her to the spot where the Checks father was buried. May explained the horrorific things the Checks did including murdering their own father for being a cross-dresser. She told her she’s abandoning the story and won’t reveal her secret that Em is a Reviver.[15]

Ramin and Dana helped receive U.S. Food and Drug Administration specialist Tony Chu to Wausau. Together they investigated a case where a group sneaked body parts into the quarantine zone. They investigated a restaurant that turned around to five-star quality food overnight. They uncovered the man had food powers allowing him to use a chopped of chef's hand to help him cook. Em Cypress helped take him down.[16]

Retrieved from "https://imagecomics.fandom.com/wiki/Martha_Ann_Cypress_(Revival)?oldid=62012"
Community content is available under CC-BY-SA unless otherwise noted.