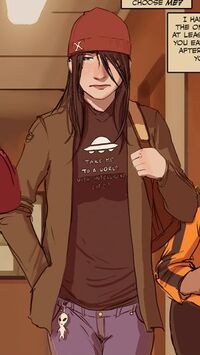 Mary Parker is a Witchblade bearer. Unlike the others, she does not sport a high physical prowess or come with remarkable physical beauty.

Mary grew up with Tony Estacado. They were inseparable until Tony inherited his father's estate and moved away. Since Tony never reached out to Mary, Mary grew a resentment towards him.

Mary was working at her parents book shop when she heard a noise outside where her brother had just stepped out. She discovered a large creature named Krono appeared and was tasked with stealing the Witchblade from an armored car. However, in his rage to open the armored vehicle, he carelessly threw it at Mary. When the smashed truck pinned Mary against the wall and the Witchblade fell into her hands, she became the newest Witchblade bearer and battled Krono by channeling the abilities of Una, and later on Zala.[1]

The next thing Mary knew, she woke up in the hospital. The staff said she had lost a lot of blood but she showed no signs of injuries. She soon returned home and bonded with her brother who was slightly uneasy after seeing her transform into a monster the day before. The next day at school Mary had to deal with rumors of her involvement in the attack from classmates. On her walk home, she was suddenly approached by General Celestine and offered a chance to give her the Witchblade in exchange for her life. Instead, Mary attacked her out of instinct.[2]

Retrieved from "https://imagecomics.fandom.com/wiki/Mary_Parker_(Switch)?oldid=56338"
Community content is available under CC-BY-SA unless otherwise noted.