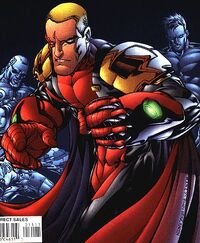 Matthew Callahan is the son of Stephen Callahan, a former member of Team 7. Team 7's superiors, the intelligence agency International Operations had exposed the team to the Gen-Factor, a substance that endowed the team with superhuman powers. The survivors from this experiment were codenamed Gen12. I.O. hoped to use them as weapons, but Team 7 turned out to have a will of their own. A couple of years later, I.O. decided that Team 7's children could have inherited their fathers' powers and if they could raise them from childhood, they could ensure their obedience. Most Team 7 members went into hiding with their children. Stephen and his family tried to escape as well, but I.O.'s troops caught up with them in Ohio and shot and killed Rachel; Stephen's wife. They then shot Stephen and took Matthew and his sister Nicole with them. Years later Stephen turned up alive, claiming that he had been wounded and taken prisoner by I.O. Matthew and Nicole were raised by I.O. and became obedient soldiers (Matthew more so than Nicole), but seeing their parents die had damaged their minds. Matthew had become a psychopath and Nicole was obsessed with controlling people. During his training, Matthew was injected with drugs to boost his powers. A side-effect was his left eye exploding during a test. He wore a red plastic or metal patch over of his eye, refusing to have a bionic replacement.

A couple of years later, I.O.'s leader Miles Craven was so impressed by Matthew and Nicole (now calling themselves Threshold and Bliss) that he ordered Ivana Baiul to restart Project Genesis. The project would screen children and teenagers for genetic anomalies (usually indicating that they were the children of Gen12 members) and bring them back to the project to be gen-activated. Baiul would use Threshold and Bliss as superpowered guardians in case the gen-activated children became troublesome. Baiul controlled Threshold with a mixture of sex and addictive drugs. Former Team 7-member and high-ranking I.O. operative John Lynch took an interest in the project, both out of concern for the children (many Gen-activated humans went mad or died) and in an attempt to locate his own missing son. Lynch suspected that Threshold might in fact be his own son, taken by other Team 7 members for his own safety. Threshold didn't believe this, because he could still remember his real father's death. John Lynch would later discover that Robert Lane was really his son.

Project Genesis' most promising subjects, the future Gen¹³, would escape the project once they found out what its true intentions were. In reality, this was a test orchestrated by Baiul and Threshold. Threshold himself went along with Gen¹³, disguised as a guard named Tom Hallinan. He hoped that the stress would activate the powers of Gen¹³ members that were still inactive and hone their fighting abilities. Threshold managed to convince most members to follow him to avenge themselves on I.O., but Caitlin Fairchild disagreed and stayed behind. Back at I.O.'s base, Threshold revealed his true nature and captured the others, but Fairchild came to their rescue, aware of Threshold's betrayal due to a mental link she had with Gen¹³-member Roxy Spaulding. At the same time John Lynch used his influence to get several loyal soldiers to assist him in freeing the Gen¹³-members. Lynch and Gen¹³ joined forces and defeated Threshold, Bliss and Baiul. Baiul, Threshold and Bliss escaped and took several gen-active children with them, frozen in cryogenic tubes. Both Lynch and Baiul left I.O.'s service at this point, though Baiul masked her desertion as pursuing Lynch and his team.

A few months later, Threshold had been training the best of the gen-active children they had taken along as DV8, also known as the Deviants. They fought Gen¹³, but were defeated. Over the next few months, Threshold and DV8 fulfilled various missions for Baiul that allowed her to return to I.O. and become its new leader. During one of those missions, DV8's New York hideout was destroyed, including the drugs Ivana used to keep Threshold under control. Over the next few months, Threshold slowly built up his strength, during one mission he turned on his team and left them for death to attack Ivana. He seriously injured Ivana, but DV8 managed to stop him, injuring Threshold. Threshold left for Las Vegas, where he started to gather an army of gen-active soldiers.

Retrieved from "https://imagecomics.fandom.com/wiki/Matthew_Callahan?oldid=60155"
Community content is available under CC-BY-SA unless otherwise noted.