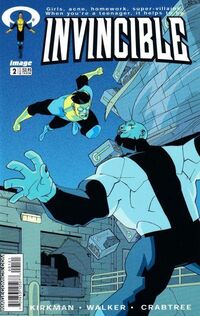 They may not look it but the Mauler Twins are geniuses. The original (whichever one that was) was a brilliant scientist that created a cloning machine and tried it out on himself. This produced his clone that thought he himself was the original. A lot of their actions seem to be based off of their desire to conduct experiments and gain political power. They do however seem to be respectful creatures with a genuine love for science.

Before a clone was created, Omni-Man defeated the original in battle, leading to his meeting the original Guardians of the Globe.

Invincible's first encounter with the twins involved them stealing video game systems to harvest their parts for an army of robots they where building. He and the Teen Team haulted their actions.

The next time they appeared was at the Guardians of the Globe joint funeral after Omni-Man murdered them. As all the heroes prepared to escort them out physically, the two swore they were only there to pay their respects to a great advisory. Even when [[Markus Grimshaw]|another hero]]'s butler went on a rampage with his employers power suit, the two kept their distance from the trouble at hand.

However, any morality points the two may have racked up where quickly squashed when they stole The Immortal's body and attempted to control him. This did not work and, after the Immortal was revived, he escaped and later took the twins to prison.

the next time the two of them made an appearance, Angstrom Levy, a dimension hopper attempting to meld himself with his counterparts from other worlds, was using his abilities to break them out of prison. he needed them to build the machine he would use to combine himself with the rest of the him's together, and the two agreed.

The Twins built a massive machine and where going to combine all the different Levy's when Invincible came to stop them. We then got to witness several versions of the Twin's from different worlds. However, all but one of the Mauler's were destoyed when the machine backfired.

The one remaining Mauler Twin, in true Mauler Twin fasion, cloned a new brother. But this time, there was no mistaking who was the original and who was the clone, as the original was horrificaly scarred from the explosion. He used this new status as the "Original" to keep the latest clone under his boot until he was finally poisoned by his own creation. The new clone continued to honor the tradition as well by cloning himself. Once the process was completed, the two agreed that arguing over who the original was what keep them motivated.

Soon after that, the hero Robot employed them to help him move his conciousness from his origional mutilated body to a new one he had created. Once they finished, he double crossed them and put them back in prison.

The Mauler Twins where last seen in a mass breakout of the a prison. It is unclear if they where captred or not, but regardless, they will probably be seen out and about soon, as their initial goal (whatever that is) has not been reached. The Mauler Twins were eventually killed by Kid Omni-Man, and most likely will not return.

Except at least one of them did. Operating out of Kuwait, a remnant of the twins had been ruining experiments and constructed a 'gene bomb.' When unleashed, it spread a virus that altered the chromosomes in male subjects that would result in any of their children being born a Mauler. His less successful experiments were turned into massive, seemingly feral, cyborgs who he unleashed upon the Guardians of the Globe when Best Tiger and Kaboomerang discovered his operation. Japandroid and Ms. Popper attempted to find the bomb in Kuwait City only to discover that it had been set off months ago. He used an escape pod that Kaboomerang struck down but they never found a body. Furthermore, numerous Mauler babies were left behind and their fate was left unknown.

Retrieved from "https://imagecomics.fandom.com/wiki/Mauler?oldid=61490"
Community content is available under CC-BY-SA unless otherwise noted.