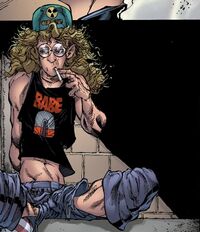 Max Jr. Williams IV is one of seven children by Twitch Williams and Helen Williams.

When his father and mother separated for a period of time, he became distraught. Max ran away from home. At a nearby mall, Max Williams IV was playing video games with his friend Eddie when a young girl named Dawn distracted him and he lost the game. The two begin flirting and sharing personal stories.[1]

Later, Max found Dawn kissing another boy at the park and felt rejected.[2] Dawn calmed Max down and bit her lip to bleed. She then shared the blood in a kiss with Max. Max began experiencing symptoms only Dawn was able to heal with touching him.[3]

Max's condition began to deteriorate. She whisked him away to other Kingdom members and revealed to him that he was being born again as the Kingdom purged the world of non-vampires and sinners.[4] Ab and Zab soon sneaked into the Citadel of the Kingdom and grabbed Max Williams IV. They brought him to a portal to hell per Spawn's plans.[5] Ab finished the portal and an explosion consumed all the Kingdom members in a fire. Max continued to exist between the dead and mortal dimensions. He spoke with his father in dreams that he missed him and hoped to return one day.[6]

While doing research, Twitch found a newspaper article that showed a picture of the mortal Al Simmons. He compared it with the recent arrest sheet for the man who came to jail with a missing shadow. He realized Al was now mortal and was still furious from him interceding his suicide plot.[7]

Twitch asked Sam Burke to assist him in tracking down Al Simmons. He wanted revenge for what happend to Max.[8] After being turned down, Twitch went out on patrol and miraculously spotted Albert Simmons. He tackled him and had him tied up in the abandoned building where he had attempted to commit suicide. Twitch reminded Al he stopped him from killing himself. He then rebuked him for taking Max Williams IV from him. He put a bullet in his gun to play Russian Roulette. Al eventually had enough and transformed into Spawn and broke free of his binding. Twitch fired a shot but it didn't slow Spawn. Spawn told Twitch that people move on. He saw it with Wanda, and he believe Twitch could one day see it with his son. When he threatened to drop Twitch off a roof and Twitch choose life, Twitch began crying realizing what he had become.

Spawn transformed back to his mortal form and offered Twitch a chance to save his son. He suddenly collapsed as he was bleeding from his wound. He had learned his mortal body now retained wounds while in his Spawn form.[9] The two headed to Boston where a house held seven ghosts, one of which was Max. Spawn ushered Twitch in and after a brief battle with the local ghosts, Spawn opened a portal to hell. Spawn saved Max and reunited him with his family as penance.[10]

Upon hearing that his sister, Lauren Williams, had been kidnapped he left service in the army to be home with his family.[11] While sitting in the window at his house, he was snipped from behind by an assassin.[12]

Max Later Returns during the time of Jim Downing as Spawn Waring him and his father of a great threat coming.

Retrieved from "https://imagecomics.fandom.com/wiki/Max_Williams_IV?oldid=66798"
Community content is available under CC-BY-SA unless otherwise noted.