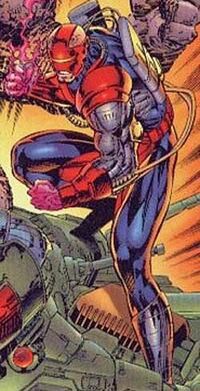 Attica is the leader of the mercenary trio known as the Troika. He has robotic enhancements.

The Troika first appeared working for the Gnome, helping him to retrieve the orb from Helspont. After the Gnome was defeated by Lord Emp, the Troika fled.[1]

When the Troika, working for Tapestry, faced the WildC.A.T.s again, Attica was defeated by the C.A.T.s' ally Huntsman manipulating H.A.R.M.'s artillery, and was then held at gunpoint by Soldier.[2]

After H.A.R.M.'s death, Attica and Slag attended his funeral, where Attica tried to impress H.A.R.M.'s widow Irene. They were captured at the funeral by Savant's new WildC.A.T.s.[3]

Attica and Slag were kept in a virtual reality environment[4]. When the WildC.A.T.s found that Tao had caused the war through manipulation, he freed Attica and Slag as a distraction. They weren't sure if it was still the virtual reality, but they decided to kill the WildC.A.T.s anyway. John Colt suddenly appeared and his change of codename further confused them, so they decided to escape to fight another day.[5]

Retrieved from "https://imagecomics.fandom.com/wiki/Maxwell_Burns?oldid=54282"
Community content is available under CC-BY-SA unless otherwise noted.