Start a Wiki
May Tao 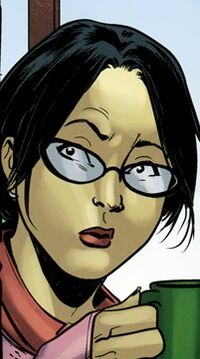 May Tao first became a reporter so that she could feel superior to others. She didn't want the fame or moeny, she just liked knowing thing other people didn't.[1]

After Revival Day, she took the first footage of people returning to life and reported it first on the news. She has since become a mini-celebrity as the woman who was there first.[2]

Later, Mrs. Vang called May Tao thinking she had a story. She explained she stole items while cleaning white people's homes. May Tao suddenly made an excuse to leave. While she was meeting with Mrs. Vang, Blaine Abel spotted May Tao and followed them out of the restaurant. He offered to help Mrs. Vang changed her flattire on their way out but May left them before they could talk.[3]

Later, May headed back to Mrs. Vang's home to complete the story. She stumbled into the basement where she found Mrs. Vang knocked out with a circle and ornamentation hung up in some form of a ceremonial configuration.[3]

May stopped by the Rothschild Police Department Headquarters for questioning on the event. She ran into Em Cypress and dropped her two cell phones. Unnoticed, Em spotted the picture of the Creeps May had on her phone before slyly returning it to her. As May left the building, she was continued to be stalked by Blaine Abel and was kidnapped.[4]

When she woke up, she was strung up with an occult circle in front of her. The ring stolen from Mrs. Vang's home sat in the middle of the circle as bait. Blaine told her he was laying a trap for the Creeps as he took a call from someone famous who needed his help. Em stumbled upon their location and freed May. She then used the ring to lure the Creep into nearby water which appeared to destroy it. As the two left, they were chased by Blaine who shot Em with a crossbow. May was shocked to learn Em was a Reviver as she healed instantly from the injury. Em continued to save May from Blaine and put him in the hospital after a big crash disabled Blaine. May began to trust Revivers more and questioned her resolve break the story.[5]

May Tao called her editor to cancel the story. She deleted the photo of the Creep. She then headed to the hospital to ask Thang Vang where the ring came from as it seemed the Creep wanted the ring. Vang told her it came from Mr. Myer's house.[6]

May Tao headed to a coffee shop to think about who could be someone famous implicated in her kidnapping case that needed Blaine's help. She sees Lester Majak on TV and writes his name down on a piece of paper as someone to investigate.[7]

May Tao tracked down Lester Majak's home. She then pretended to run her vehicle off the road and asked to use his home to keep warm. She recorded their conversation in secret. Lester told her how he grew up but eventually called her out on why she's there. May admitted she was abducted by Blaine Abel and looking for someone famous to be associated as he had received a call during the incident. Lester walked her to the garage to show her his damaged snowmobile and he was only asking for help on fixing his snowmobile. May feels horrible having assumed worse and leaves him in his home.[8]

May next investigates the Checks. She spoke with Mrs. Check at her home and learned about their father and what the three boys went through. She paused when she looked through pictures of women in their lives and then looks at a picture of the father.[9] May brouth the photo to Blaine Abel and asked he he recognized Mr. Check. Blaine didn't but wonders what they're doing in the Forestry Unit. He tells her it's the only place in town with white birch trees.[10]

May Tao returns to this hospital and learned Thang Vang is being treated for smoke inhalation. Abel tells her Joe Myers self-immolated after getting the ring back he was searching for. Abel warns her he looked like he was possessed by a demon. Blaine tells her that he's seen the demon look three times. The first was when he killed his father. The second time he saw Em. And the third was Joe Myers wandering the halls.[11]

May Tao next headed to the strip club where she interviewed a stripper who was a past girlfriend of Anthony Check. She told May that Anthony was working in Derek Hinch's shed for a while and then points to Nikki Jensen who just entered the building. Nikki ran out of the club.[12]

Soon May headed to the forestry unit to dig up the Checks history. She was tailed by Em. Upon arriving, May dug up the remains of Mr. Check, and she explained the picture she found of women, revealed that it looked like Mr. Check. She had learned that Mr. Check had left town as a man and returned as a woman. His three sons couldn't accept his new lifestyle and murdered him. Rather than expose the story of Em being a Reviver and the cover-up from her police officer sister, she was going to kill the story as it was better left unsaid.[13]

Retrieved from "https://imagecomics.fandom.com/wiki/May_Tao_(Revival)?oldid=40746"
Community content is available under CC-BY-SA unless otherwise noted.