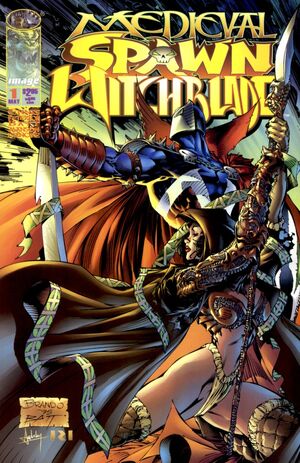 In present day 1996, an unknown man sits with a disgruntled head in a a box. The head calls him names and the man asks if he's still going to hold a grudge 800 years later.

In ancient times, Archon Matthew Royale approaches the wielder of the Darkness, Lord Cardinale. He proposes invading the nearby Faerie to gain knowledge in magic. He did not forsee this would rip a whole in space and time and allow creatures from Earth to their lands.

Medieval Spawn passes through the portal and helps stop Lord Cardinale's creatures from invading a town. He's joined in battle by Katarina Godliffe who has recently obtained the Witchblade. After beating the troops, they agree to join up and save nearby towns from Cardinale's troops.

Lord Cardinale is concerned that his troops were beaten and asks Royale if this Witchblade and cross-dimensional team-up will be an issue. Royale stands frozen in shock to the events.

Retrieved from "https://imagecomics.fandom.com/wiki/Medieval_Spawn/Witchblade_Vol_1_1?oldid=47187"
Community content is available under CC-BY-SA unless otherwise noted.