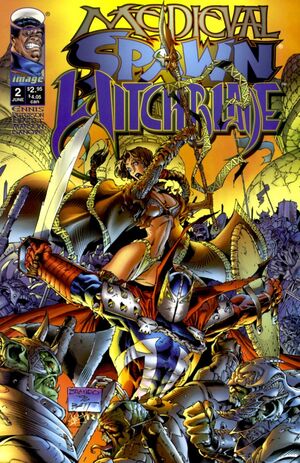 Medieval Spawn and Katarina Godliffe arrive in Faerie only to see it is nearly completely destroyed by Lord Cardinale's troops. They stumble across a leprechaun lying on the ground, injured from battle. Stalker smashes him below his boot and tells them he hates leprechauns.

They agree to head to Bel-Gadryel. Spawn knows the elven leaders will have their stronghold their and Stalker whispers to Katarina that is where the loot will be to make them rich.

At Bel-Gadryel, Lord Cradinale revels in his troops overpowering the enemy. While he's distracted, Elinor presses Archon Matthew Royale for the truth. She wants to know why he wants to storm the Elven masters as she doesn't believe his story that it is just for knowledge. While she strangles him, Royale admits that Witchblade was created to oppose the Darkness and could pose a threat.

As Spawn and Katarina walk and talk, Spawn slips that they actually know each other and have met before. Before she can inquire, they are attacked by Cardinale's troops. They beat the troops back and rest for the evening.

That evening, Royale uses his magic to teleport to Spawn and Katarina's location. He offers to teleport them in to battle Cardinale, and they reluctantly accept as it is their best option.

Retrieved from "https://imagecomics.fandom.com/wiki/Medieval_Spawn/Witchblade_Vol_1_2?oldid=47188"
Community content is available under CC-BY-SA unless otherwise noted.