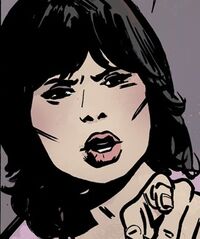 Megan Holt and her parents took Kyle Barnes into their foster hom after Kyle put her mother in a coma. When Kyle was bullied by Donnie, Megan always came to Kyle's defense. After Donnie moved out of the foster home, Megan convinced her parents to adopt Kyle.[1]

Attempt to get Kyle's life back together

After Kyle kept pushing her and all his friends away, Megan came to Kyle's house in an attempt to help get his life back together. Megan then took Kyle to a local grocery store where she bought Kyle some groceries and a disposable phone. Later, Megan took Kyle to her house, though her husband wasn't too happy to see Kyle.[3]

Days later, Megan took her daughter grocery shopping with her. While loading the groceries in the trunk, Holly walked off and nearly got hit by a car. Megan thanked Sidney for saving her daughters life.[4]

Megan eventually learned that her husband had beat a man up a few days ago. When she was told it was Donnie, she didn't care as she didn't want her husband to lose his job.[5]

A couple weeks later, Megan dropped her daughter off at school then departed to meet Allison Barnes in Charleston. They discussed about their lives and Kyle at a local coffee shop. Later, when Megan returned to Rome, West Virginia, she encountered Donnie. Donnie tried to apologize for his past but Megan told the former he will always be a rapist.[2]

After Kyle went to visit Allison, the former called Megan to pick Kyle up. When Megan arrived, Kyle wasn't pleased to see her and Megan asked if he wanted her to get Allison to call the police. Megan told Kyle Allison is only trying to help him. As they left, Amber stepped out to say hi to her dad. When Allison asked her father if he left because her mother was "scary", Megan was puzzled. After Allison and Kyle tugged for Amber, Amber ran into Megan's arms as the two argued. While driving back, Megan asked why Amber called Allison "scary" and she shouldn't live with her mother if she believed that. Megan asked for more answers but was told it wasn't the right time.[6]

In her sleep, Megan became possessed and woke her daughter up.[6] When Mark came by, Megan jumped Mark and banged his head on the floor a few times. When her daughter came out to tell her to stop, Megan jumped for her, though Megan was subdued by her husband. Later that night, Kyle and Reverend Anderson came to exorcise her. A possessed Megan told the two they could exorcise her but they can't stop The Merge. Megan then tried to absorb Kyle's power but the latter reversed it, causing the two to briefly pass out.[7]

Retrieved from "https://imagecomics.fandom.com/wiki/Megan_Holt_(Outcast)?oldid=45130"
Community content is available under CC-BY-SA unless otherwise noted.