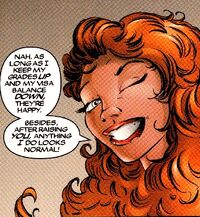 Merrily Wainright is a socialite and sister to H. Percival Wainright III best known as Black Anvil. She is a member of the aristocratic Wainright family.

She is seen only twice in the first volume of Strykeforce. In Issue #4 of Strykeforce, Merrily celebrated her birthday and happily was surprised by Black Anvil's gift in the form of a shrunken head.[1] She was elated as she specialized in collecting bizarre items including mummies, voodoo dolls, animal heads and other unique items. She claims to have raised Anvil and prides herself on doing whatever she wants so long as she keeps her credit card balance down and her school grades up. She also claims that after raising Anvil, anything else she does appears normal to her parents[2].

Retrieved from "https://imagecomics.fandom.com/wiki/Merrily_Wainright_(Top_Cow)?oldid=51783"
Community content is available under CC-BY-SA unless otherwise noted.