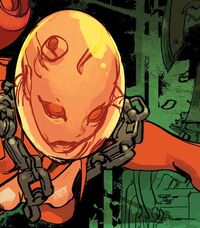 Mertali is from a race that has long-since grown adjusted to the sun's radiation. She eventually found herself traded into the slave business in Poluma under Roln's rule.[1] She was placed in the tanks and fought side-by-side with Marik Caine until she earned his freedom by escaping.

Unfortunately her friend Marik died in the process but not before teaching him to always be positive.[2] Mertali traveled with Stel Caine, Marik's mother, and promised to bring her to the surface to honor Marik's death.[1] When they arrived at Misalt to recharge their supplies, they found themselves attacked by Mertali's people, the Bloodsuckers. She fought to free Stel from their hypnotic gaze and brought her back to the ship to escape the town. Zem had refilled their supplies right as they returned as they headed back to the surface to find the landed probe.[3]

Retrieved from "https://imagecomics.fandom.com/wiki/Mertali_(Low)?oldid=46807"
Community content is available under CC-BY-SA unless otherwise noted.