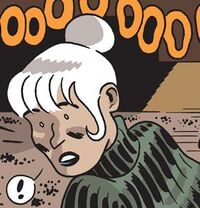 Mia Dorme is an assassin who works for Messina. She was ordered to kill Carmine Taglioni but was beat to the punch by an unknown female assassin. However, the other assassin was messy and made too much noise which caused Mia to be spotted outside of Carmine's window when he was killed by being thrown from it. She chased the assassin but she got away.[1]

She later met with Pete. They discussed if it was a setup as it was too much of a coincidence. They suddenly had shots fired at them and attempted to flee.[1] They lost their pursuer but took note of their license plate.[2] They tracked it down to discover it was Nicole. They attempted to follow up on another lead but he was blown up in a bombing. They decided to head straight for Massina and Scalina for answers.[3]

Retrieved from "https://imagecomics.fandom.com/wiki/Mia_Dorme_(Dark_Corridor)?oldid=51156"
Community content is available under CC-BY-SA unless otherwise noted.