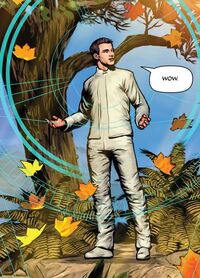 Michael was born into a society where there is no diversity, creativity, or symbols of capitalism. It was a utopia powered by robots who performed all manual labor and tended to humans' needs. Michael grew up with his brother Matthew. One day, an EMP blast destroyed the solar tower that powers all the robots. In the wreckage, he found Marciela, the first black woman he ever saw.[1]

Years later, Michael ran from the robots as they promised him a peaceful life. He denied their claims and demanded to know why he was never told the truth.[1]

Retrieved from "https://imagecomics.fandom.com/wiki/Michael_(Symmetry)?oldid=52145"
Community content is available under CC-BY-SA unless otherwise noted.