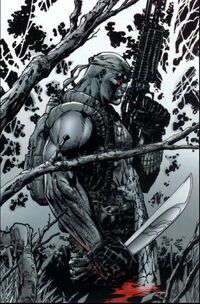 Michael Cray was a Navy SEAL prior to being transferred to I.O.'s newly formed Team 7. Like all members of that group, he was a highly experienced Special Forces operative, and had the potential for psionic powers. The team had been sent on a mission (or so they believed) when in reality they were sent to be exposed to the Gen Factor by Miles Craven (head of I.O.). Unlike the other surviving members of Team 7 (not everyone survived the exposure to the gen factor treatment), Michael's powers did not manifest until many years later. When the majority of Team 7 went underground (with their families), Cray continued to serve I.O. (as did Lynch, Dane & Backlash).

Michael Cray left I.O. when he was diagnosed with a brain tumor. He wanted to atone himself for all the innocent men and women he killed during his missions. He got his chance when the Black Angel awoke, a demonic entity bent on killing a young boy with miraculous abilities. It turned out that Cray's cancer was in fact a result of the Gen Factor, giving him regenerative abilities. Cray defeated the Black Angel with the help of Sister Mary, a former police officer turned nun, Gabrielle D'Angelo, his ex-wife who had become a vessel for the archangel Gabriel, and several of his Team 7 colleagues. After the death of the Black Angel, the young child restored the damage he had done by rewriting reality, but in the new reality, Gabrielle had died during their honeymoon.

Deathblow died during the Fire From Heaven event, sacrificing himself in order to kill Damocles, the villain from said crossover (see Deathblow #29).

After the events of Captain Atom: Armageddon and the Worldstorm, Deathblow will be revived and will star in his own series, Deathblow Volume 2, written by Brian Azzarello with art by Carlos D'Anda.

In the 3-issue mini-series, Deathblow By Blows (1999-2000), written by Alan Moore with art by Jim Baikie, it is revealed that I.O. have created several variant clones of each Team 7 member, using the DNA collected from them without their knowledge. In the event of a Team 7 member's death, their clones are released in a simulated environment with the intention that only one survive to act as the member's replacement. However, the series is concerned with Deathblow's clones only. The clones were:

All were killed by Judgement except for Genevieve, who escaped from the laboratory where they were created and Kraus Clay, who was captured by Genevieve and later killed by John-Joe and Joe-John Cray. Gemma, Cynthia and Michael Cray, Jr. are never shown alive due to being killed by Judgement Cray before the protagonists discovered them. Genevieve later joined up with Sublime, Michael Cray's daughter and a few of her DV8 teammates.

Retrieved from "https://imagecomics.fandom.com/wiki/Michael_Cray?oldid=71795"
Community content is available under CC-BY-SA unless otherwise noted.