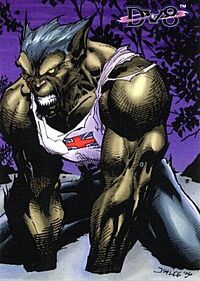 Michael Heller (aka Evo) was a member of the super human team DV8.

Michael Heller was one of the few young men and women selected to be part of Ivana Baiul's Gen¹³ project at International Operations. Heller gladly agreed to join the program because it, as he put it, " it beats spending eight months in juvie hall."

After becoming fully Gen-Active at Project Genesis, Michael was gifted with the ability of trans-species morphing. Evo could turn himself into a humanoid bat, wolf or amphibian. He was code named Evo, based on these unique abilities. However, Evo was not of the first group of teens to be made gen-active by Ivana. After Ivana had lost her first group to John Lynch and a well played escape effort, Evo was drafted into Ivana's next group, known as the Deviants.

Already a troubled young man before being drafted into the Deviants, life on the team only fueled Evo's darker impulses. Things were only made worse as he became the avoided member of the group, seen as immature and unneeded by many of his teammates. He began to relish killing and the use of drugs, both easily available to him in his new position.

After the end of the DV8 series Evo was captured by the NYPD and sent to the Purgatory Max prison for superhumans in Antarctica for killing a police officer. Finally faced with the consequences of his actions, Evo resolved to try and turn his life around. He got the chance when he helped save the life of the hero Backlash during a riot at the prison.

Retrieved from "https://imagecomics.fandom.com/wiki/Michael_Heller?oldid=27909"
Community content is available under CC-BY-SA unless otherwise noted.