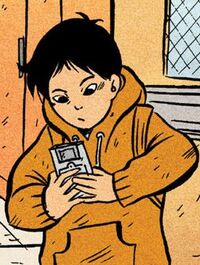 Mike is a child who gets lost in video games. He walks to school with his head buried in games as he follows his big sister, Mie.[1]

One day, he stumbled upon the body of Plutona, Metro City's greatest superhero. He, along with his friends, decided to bury her and keep the death a secret to keep the town safe.[2] Mike returned later that night and found Teddy standing over her with a knife. Together they agreed to move the body and hide it from the others.[3]

The next day the group returned and was sad that the body was missing. They returned home empty handed except for Teddy and Mike. They secretly stayed behind with Plutona's body. Teddy pulled out a knife and extracted a small amount of blood to see if it would give them powers.[3]

Over the next few days, Mike and Teddy sneaked away at night and cut their fingers to try an fuse Plutona's powers with them. Eventually, Mie noticed the band-aids and asked Mike what was going on. Mike played it off as if nothing happened. However, Mie and Ray investigated Teddy's strange behavior and stumbled upon their secret. When things became physical, Mike watched as Ray pushed Teddy and Teddy fell over and stabbed himself in the stomach with the knife they were using.[4]

Retrieved from "https://imagecomics.fandom.com/wiki/Mike_(Plutona)?oldid=62137"
Community content is available under CC-BY-SA unless otherwise noted.