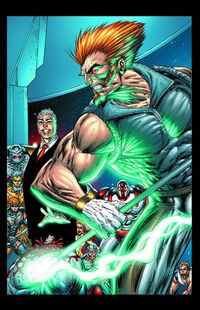 Surreptitiously indoctrinated into the new Youngblood Program after he surpassed combat training in the Bloodpool, KnightSabre became a permanent member of Youngblood with an animosity towards Die-Hard

KnightSabre can instantaneously absorb the anger and aggression of the enemies within his immediate vicinity as well as convert the belicosity and antagonism that he has automatically absorbed into powerful kinetic energies that he can also channel within and throughout different manners of weapons and materials which bequeaths him a trio of certain personal energy manipulating influence abilities... which unmistakably includes "Energy-Enhanced Strike" as well as "Energy Absorption" coupled with "Energy Manipulation" which he brandishes violently against his assailants. Due to the turbulent nature of his violent empathic powers, KnightSabre's temperament and personality are cantankerous and supercilious rendering him relentlessly quarrelsome furthermore combative and warlike. His aptitude and attitude has made him arrogant and cocky and although the members of Youngblood usually engage their enemies strategically coordinated with syncronized tactics, KnightSabre almost always is the first bastard to openly encounter their rivals regardless...even if he's caught in an inescapable killzone he utilizes his "Blast Power" to literally tear his misinformed adversaries "limb from limb" as he continuously reinvigorates himself with the belligerence and hostility that is emitted from the theater of war.

Retrieved from "https://imagecomics.fandom.com/wiki/Mikey_Graves?oldid=66886"
Community content is available under CC-BY-SA unless otherwise noted.