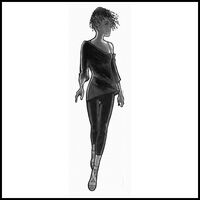 Mirra Sway was a C.I.A. operative who was recruited by General Clarkson to keep an eye on Dr. David Loren, who was unhappy as a virtual captive at Fort Mead. Eventually Mirra and he escaped and took off to have a wonderful vacation together.

However, everything went wrong when he told her that he was in love with her and she told him that she worked for his greatest enemy, General Clarkson. Mirra was immediately rejected by David.

Eventually she requested a transfer and was granted one and sent to Moscow, but before she departed the base, she left David a cellphone in order to get a hold of her. Eventually he did just that, but she was abducted by terrorists a short time later.

Retrieved from "https://imagecomics.fandom.com/wiki/Mirra_Sway_(Think_Tank)?oldid=59061"
Community content is available under CC-BY-SA unless otherwise noted.