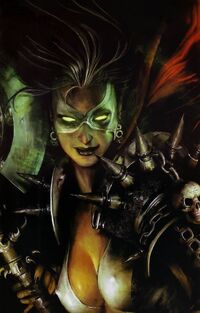 Morana is Al Simmons's miscarried daughter, believed to have been killed by her father before she was born while in reality she was kidnapped at birth by Mammon to be raised as the greatest Hellspawn. She is a servant of Mammon and an enemy of her father. She was sealed away by Nyx alongside Mammon and it's later revealed in Spawn: Resurrection, Al was never abusive to Wanda as that was a lie made by Hell to get him into suicide. In actuality, Al had a unborn son rather than a daughter, who was stillborn and was revealed to be his lost humanity.

In Spawn:Ressurection,It's shown that Al's abuse of wanda was actually a lie made up by the demons to get him into suicide and that his unborn child was stillborn as well as male.

Retrieved from "https://imagecomics.fandom.com/wiki/Morana?oldid=68834"
Community content is available under CC-BY-SA unless otherwise noted.