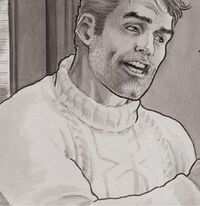 Morgan Chaffey is partners with Rowan Black on the Portsmouth Police Department. When Rowan was called into a hostage situation, he was surprised to learn she walked away unharmed and the man had burned himself alive in front of her.[1] He helped Rowan research why someone random would target her and they learned the perps name was Rowan White.[2]

Morgan and Rowan soon learned from the morgue that the body they found in the river was a famous mobster. He had his arm cut off and was killed before he was drowned. Rowan continued to have hunches as to what may have happened and Morgan became suspicious when he saw her meeting with a schoolteacher while they were investigating the case.[3]

Retrieved from "https://imagecomics.fandom.com/wiki/Morgan_Chaffey_(Black_Magick)?oldid=55051"
Community content is available under CC-BY-SA unless otherwise noted.