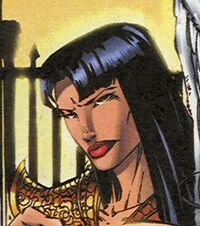 Naamah was an errand girl for one of the demons in Hell. She was sent to murder Joseph Yallod before he was able to succesfully resurrect one of Heaven's most powerful Angels, Celestine. She found an unlikely ally in several Angels who also cam to stop Celestine from being resurrected. After turning on the Angels, she killed Yallod as well.[1]

Retrieved from "https://imagecomics.fandom.com/wiki/Naamah?oldid=49782"
Community content is available under CC-BY-SA unless otherwise noted.