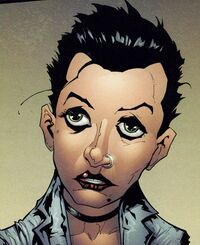 Nadja was friends with victims of the witchkiller. When they were murdered, she appeared at the crime scene to help Sam Burke and Twitch Williams find the killer by giving them all the information she could.[1]

She informed them friends were celebrating the vernal equinox and that witches are a peaceful bunch.[2] She soon brought in her Warlock friend who had noticed a particular member of the witch community that was violent and spoke in ways a witch would not. He lead them to the screenname Corwin which led to A.J. Ritter, the witchkiller.[3]

After he was held captive in jail, they found him murdered in his cell. The police report said he had killed himself with a salt-delayed capsule, but Sam Burke remained suspicious as to whether Nadja had been involved in some type of spell to get back at him.[4]

Retrieved from "https://imagecomics.fandom.com/wiki/Nadja?oldid=36765"
Community content is available under CC-BY-SA unless otherwise noted.