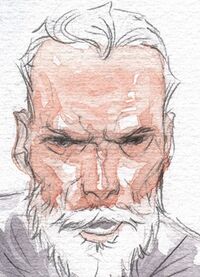 General Nagoki hold a position of power in the UGC and ordered the retrieval of the Tim Bot that was reactivated on Dirishu-6 Moon.

Nagoki was at ground zero of Niyrata when Harvesters first attacked. He had called in robotics specialist, Dr. Jin Quon to survey the Harvesters.[1]

He later spoke with his daughter, Captain Telsa, who informed him Scrappers had already arrived at the location where the Tim bot transmitted. They discussed a potential leak in UGC councel as Scrappers couldn't know their location that fast.[2]

Nagoki went to a UGC council meeting where he revealed he had discovered a Tim series bot with the same codex as the Harvesters. The other council members were quick to realize he was secretly planning on building his own Harvesters in a defensive move.[3]

Soon reports of his daughter being abducted by the Gnishians reached the UGC. Nagoki was quick to dismiss becoming concerned as he knew that Tullis would take care of her, one of his best soldiers. He soon left to meet with the council. Ambassador Telema brought in small precognitive children who told them there was a vision that the Harvesters would return, and they would be led by Tim-21.[4]

Retrieved from "https://imagecomics.fandom.com/wiki/Nagoki_(Descender)?oldid=62162"
Community content is available under CC-BY-SA unless otherwise noted.