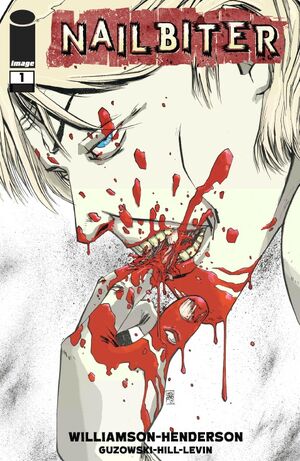 In Riverside California, Eliot Carroll leads a squad who infiltrate a house with the alleged Edward "Nailbiter" Warren inside. Upon breaking in, they find Warren eating the fingers off a recent victim.

In San Antonio, Officer Nicholas Finch holds a gun to his head on the verge of shooting himself. He receives a call from Eliot Carroll who says he needs his help. Carroll claims he's the only one that can help and that he's solved the Buckaroo murder mystery. Carroll tells Finch to stop worrying about his suspension trial coming up in nine weeks and catch the next plane out there.

The following day in Buckaroo, Oregon Finch arrives via car. He awaits outside a building for Carroll. Finch has a flashback to having his knuckles bloodies as a man in an interrogation room is pronounced dead and he stood bewildered unable to answer for his actions. Snapping out of his flashback. a woman walks by and warns him not to bite his fingernails in this town. Finch is suddenly stung by a bee. The girl tells him there's a nearby honey farm in the woods.

Finch spots the Murder Store down the street and heads in to investigate. He picks up a strange mask amongst the strange paraphernalia. C Raleigh Woods sneaks up on Finch and begins talking to him about the sixteen famous serial killers from the town. They talk about the mask being a replica of the Book Burner, who was the first serial killer from Buckaroo.

When Finch sees the girl from earlier being bother by two boys, he steps in and roughs up the boys.

Sheriff Crane stops the ruckus and asks what's going on. When Finch tells her he's looking for Carroll, she tells him she met him every morning for coffee but missed their meeting that morning. They figure since he found out the connection with the Buckaroo murders someone wanted him silenced.

Crane takes Finch to Nailbiter Warren's home as he was acquitted. Warren answers the door with bloody hands and a butcher's knife and tells them he was just preparing a roast. Behind Warren, a bloody heart sits a top a cutting board in the kitchen.

Retrieved from "https://imagecomics.fandom.com/wiki/Nailbiter_Vol_1_1?oldid=36246"
Community content is available under CC-BY-SA unless otherwise noted.