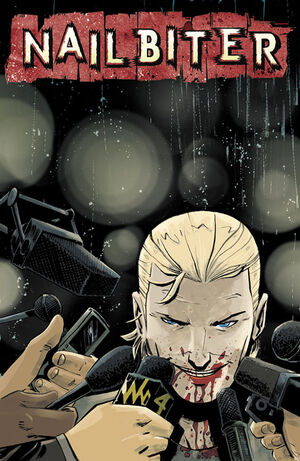 Reverend Fairgold prepares for his day by shaving. He walks downstairs to find his wife preparing breakfast. She goes on about their son and Louis reminds her that he sends his days in heaven now. He tells her that they have a meeting and he'll be home late.

At Sheriff Crane's home, Finch knocks on the door with Warren held close by. He reveals he had interrogated Warren and they now have information to share. When a sudden knocking at the door occurs, Crane rushes them into her room. Crane opens the door and Abigail Barker waits outside. She walks in and warns her about working with Finch. She tells her that Finch is not right in the head. Barker has a sudden vision about stabbing Crane in the stomach with a knife but snaps out of it. She excuses herself.

At the church sermon, Reverend Fairgold speaks about the need to stop the Buckaroo Butchers. The church then all dress in robs like a cult and yell together about purging the evil from the town.

At Crane's home, Warren tells them how he witnessed The Clown Killer get arrested. Walter's mom, Rose Kenny, pulled Warren aside and went on about wanting to cure her urges, not pass them down to her son. She told Warren to come back in a few hours for cookies. However, when he returned, a murder-suicide occurred and both of the Kennys were found dead. Warren went on to eat the cookies Rose had cooked for him and stared at the bodies.

To continue telling them the story, Warren tells them they must take him to the Serial Killer Graveyard. When they open the door, they find the Reverend Fairgold and his pack of dressed fanatics standing with him.

Retrieved from "https://imagecomics.fandom.com/wiki/Nailbiter_Vol_1_12?oldid=37082"
Community content is available under CC-BY-SA unless otherwise noted.