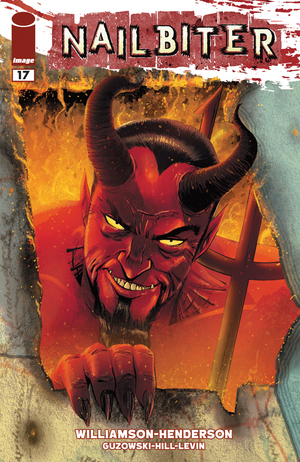 The Atlanta news report about a seventh case of Devil Killer has been found. They then show footage of the killings on TV. In a nondescript home, Daniel tells his wife to turn off the news as he's sick of seeing the 'sicko' news cover disgusting images. His wife tells him it's not even teh whole story. She says she heard on Twitter that the victims were tortured before they were killed. Suddenly, a police swat squad breaks in through their door. Daniel takes off running, realizing he's been caught. The police catch him in an alley and beat him down.

Meanwhile at Federal Bureau of Investigation Headquarters, Abigail Barker meets with several of her coworkers. She tells them she's excited about interviewing Eliot Carroll. One of them is surprised she hadn't heard the news. They tell her she is being pulled off the case and only the higher-ups will be interviewing Carroll. She has a vision about stabbing them all to death but snaps out of it when a higher-up gives her a new assignment.

Meanwhile in Buckaroo, Sharon Crane watches over her daughter, Alice, at the hospital. Doctor Glory walks up and offers to watch over Alice. Sharon thinks back to how Warren warned her to investigate Glory's past.[1] She tells Glory that she has been relieved of duties as Sheriff and that Officer Link has taken over. She finally heeds his advice and leaves to 'rest'.

However, later that night she infiltrates the hospital and sneaks into his office. She finds a book with the same symbol of the Butcher of Buckaroo. She opens it to find newspaper clippings of the old Butchers of Buckaroo. She suddenly hears a noise and packs up and heads out before Doctor Glory walks back into the room. He talks on the phone about moving operations to someone on the other line as Sharon jumps out of the room, undetected.

In Atlanta, Barker arrives to investigate Daniel. One of the men tells her that Daniel was actually born in Buckaroo. Barker becomes concerned as she was ordered off the Buckaroo case and leaves for help.

In San Antonio, Barker finds Nicholas Finch in a bar and tells him she needs his help.

Retrieved from "https://imagecomics.fandom.com/wiki/Nailbiter_Vol_1_17?oldid=51043"
Community content is available under CC-BY-SA unless otherwise noted.