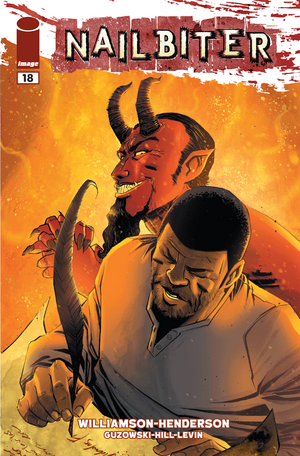 He refused to tell them where the kids were so they asked me to step in and interrogate them. He just kept smiling at me. Like we were playing some kind of game.

The Good Samaritan walks the alleyways of a city. He hells for help and plays the role of a victim. When a bystander attempts to help him, he shoots them in the head. He continues his activities of calling out for help and looks for a new victim.

At the Federal Bureau of Investigation Headquarters, Nicholas Finch has arrived in Atlanta and interrogates Daniel Castle. When Daniel tells he he does hail from Buckaroo but hasn't killed anyone, Finch believes him. He heads out to meet with Officer Vaughan and Abigail Barker. He tells them his lawyer will have him cut free and sue the station for brutality. He tells her their next step is to follow Daniel to see if he leads them to any clues.

In Buckaroo, Sharon Crane speaks with the local librarian. The librarian tells her the FBI agents have confiscated all the books that are left. When Sharon asks her what she means by 'left', the librarian explains a fire in the 1960s burned down the original town library. She headed to the original town library's location and found it was replaced by a church. As she snooped around, she found a stairwell that looked similar to the caverns in Buckaroo. She was suddenly knocked out from behind by Reverend Fairgold.

As they trail Daniel through the city, they watch him get dumped by his girlfriend and receive a call where he learns he's fired from his job. Finch can relate to how he snapped when he was interrogating the killer who had children stashed away. The next thing he knew he had killed him. Abigail grew concerned with all the violent visions she had been having recently. She asked if Finch received headaches before his snap. He doesn't have time to answer and they follow Daniel into a strange building. Upon entering, they discover Edward Warren with a victim tied up like a Devil Killer victim. Warren proclaims innocence.

There is a new serial killer in Georgia and catching it might mean selling your soul to the Devil.

Retrieved from "https://imagecomics.fandom.com/wiki/Nailbiter_Vol_1_18?oldid=51068"
Community content is available under CC-BY-SA unless otherwise noted.