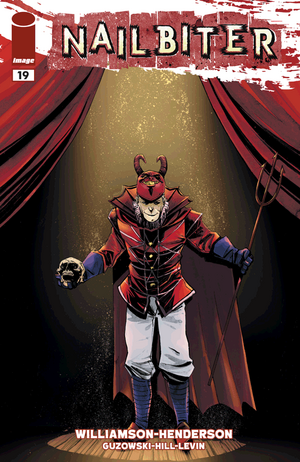 After all the crimes I had done it was my destiny to burn for all eternity in the fiery pits of hell.

In Atlanta, Nicholas Finch and Abigail Barker have just stumbled into Edward Warren standing over a dead body that has been executed in the vein of the Devil Killer. Finch begins to attack Warren but Daniel Castle pops out and asks them to stop. Finch at first thinks they killed the girl. However, Daniel is able to explain that he was attempting to escape from Buckaroo. Warren was helping him by helping him get setup with a new identity. Finch begins to blame Warren but Warren claims he wouldn't go through all the trouble if he just wanted to kill them. They then ask how he escaped from the Butcher of Buckaroo. Warren explains his story but it appears to be more of a strange fantasy where he was killed and entered Hell to battle Satan.

They try and get their footings and ask Warren and Daniel who from Buckaroo is still in Atlanta. Daniel informs them of Frank, who was supposed to meet him and Sally, the recent victim. Daniel thinks of a back-up place he was going to meet Frank, and the crew head out to the new location but cautious as Frank could very well be the killer.

Meanwhile in Buckaroo, Sharon Crane wakes up after having been knocked out by Reverend Fairgold. The Reverend attempts to explain his actions. He is furious that the town has forgotten about the death of his son, Hank.[1] He tells her that he brought her to the old library, which he presumes is what she was looking for and just claims he was protecting his home when she entered and he struck her.[2] He begins to blame her for Hank's death but Sharon claims she's not just protecting him, he truly is innocent. The Reverend agrees to work with her in finding out Buckaroo's secret as he doesn't want what happened to Hank, to happen to anyone else's child again.

In Atlanta, the crew come across the trailer park where Frank could potentially be. They find him in a large wooden structure, mounted on a trailer in some form of a ceremonial presentation. Frank yells out to Daniel to not do this to him. Frank blames Daniel for his predicament and everyone becomes wary of what is going on. When Daniel looks shocked and runs towards Frank to help him, he trips a wire that sets the structure on fire and kills Frank. Daniel begins to panic and proclaims innocence as he attempts to run away. However, he is shot in the head by Officer Vaughan. Vaughan explains he had been tracking them and tells them, "you're welcome" for taking down a serial killer. The rest of the crew is uneasy as they aren't sure they have any answers for what just occurred.

Retrieved from "https://imagecomics.fandom.com/wiki/Nailbiter_Vol_1_19?oldid=54225"
Community content is available under CC-BY-SA unless otherwise noted.