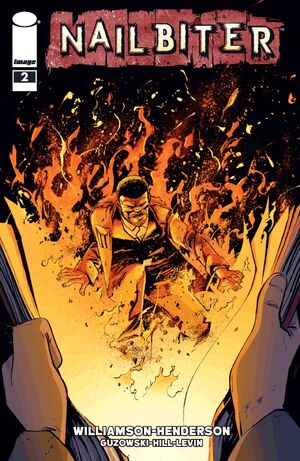 Eight months ago in Los Angeles, the jury read the decision on the Edward "Nailbiter" Warren case of not guilty. Eliot Carroll sat in the audience in disbelief.

At the present in Buckaroo, Warren tells Nicholas Finch and Sharon Crane that he doesn't have a clue where Carroll is. When asked about why he's covered in blood, Warren shows them his barn, where he butchers cows as a release. Finch looses his temper and yells that everyone knows he's a murderer, regardless of what the jury polled, and throws Warren through the window. When Warren pleads for his arrest, Sheriff Crane says it looks like 'he slipped' to her. Crane receives a call and they leave in haste.

At the motel where Carol's evidence and research was, a raging fire lights up the sky. A man in a book burner mask watches from the shadows as Crane and Finch pull up. Finch bursts into the room to grab the research. When he hears a noise, he kicks open a door with the room ablaze and sees a burnt body. Finch escapes disgruntled and mutters that this research better be worth it.

Several town members including Raleigh Woods, Alice, Robby, show up as the fire rages on. The mob accuses Warren of the fire but Crane says it's impossible as he was with her and Finch. Raleigh says Crane always covers for Warren's shenanigans. As the mob leaves, Finch discovers that Crane went to prom with Warren back in her younger years.

Crane wonders why someone would go the effort to burn all the research and commit murder. Crane inquires why Carroll would discover something so big, and then only tell Finch about it. Finch explains he was an information extractionist. He would torture people to get information.

At a diner, Finch and Crane discuss the events and other killers from the town like the Cross Bones Killer, the Terrible Two, the Blonde, and Walter Grant the Silent Movie Killer. Crane suddenly receives a call from Morty who has identified the burnt body from the motel.

As Crane and Finch pack up to head to the morgue, they see Hank's body mutilated and hanging from the Murder Store. Crane notices the man had his fingers chewed off.

Retrieved from "https://imagecomics.fandom.com/wiki/Nailbiter_Vol_1_2?oldid=36247"
Community content is available under CC-BY-SA unless otherwise noted.