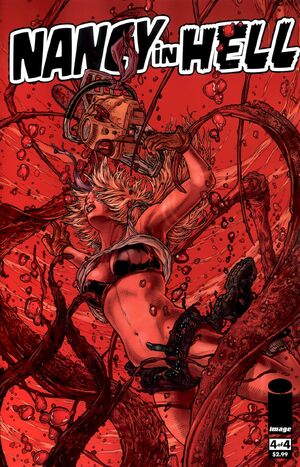 Plot Synopsis for "Nancy in Hell 4 of 4"

A man in shroud chants as he moves across the Acheron River. Lucifer recognizes him as Charon and asks for him to transport Nancy and him to the Gates of Hell. He refuses and Nancy revs her chainsaw to fight. Lucifer advises against it and he manages to convince Charon to transport them. Macabre watches from afar and follows them by walking on the river. The enraged sea attacks Lucifer and Nancy. Charon is unaffected and Lucifer grabs Nancy out of the water. While he does so, he kisses her. They arrive to the Gates of Hell and Nancy asks if he’s coming along. Charon refuses, stating that without him, others can’t get there. Nancy asks if Lucifer knows how to open the gate and he reveals to Nancy that she can manifest her willpower.

The Braindead continues their assault on them as they try to prevent them from opening the gates. A sad Lucifer vaporizes them and Nancy manages to manifest a chainsaw out of her willpower. Lucifer becomes overwhelm and begins to cry as he doesn’t want to vaporize the Braindead. He releases a massive amount of energy and vaporizes them.

Nancy watches in shock as she is unaffected by it. A sad Lucifer discusses his regrets with Nancy and the duo hug. A large beast made of man’s thoughts on Lucifer emerges. While Lucifer battles it and releases a massive amount of energy, Nancy is directed by Macabre on the exit. The door begins opening and she thanks Macabre. Lucifer heads for the exit along with Nancy and the beast is disintegrated. Macabre reveals himself to be the man who had killed Nancy Simmons in the 80s. Lucifer and Nancy wake up in Earth, miles away from San Diego, California. As they continue their journey, the duo realize that they didn’t close the Gate and now Hell is now on Earth.

Retrieved from "https://imagecomics.fandom.com/wiki/Nancy_in_Hell_Vol_1_4?oldid=41465"
Community content is available under CC-BY-SA unless otherwise noted.