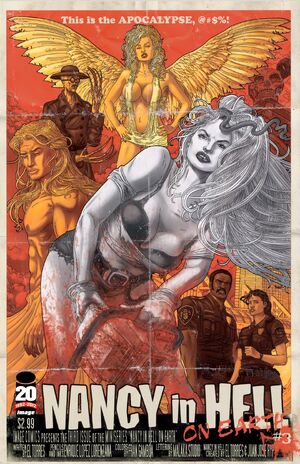 Appearing in "Nancy In Hell On Earth 2 of 4"

Plot Synopsis for "Nancy In Hell On Earth 2 of 4"

Nancy finishes killing a demon from the inside of it while the other move to a safer location. They continue moving until they secure a school bus for transport. The US military sends helicopters to deal with the giant creatures. Ernest continues driving and manage to evade Hellspores. Samantha is swatted by one. Lucifer continues to ask God for help and he sees an angel. They continue their drive and head to San Diego Central Jail.

Macabre watches from the distance and Gabrielle appears before him. Gabrielle calls Earth a waste and heads elsewhere, much to Macabre’s confusion.

Nancy and the rest arrive to see the groups of prisoners out of their cells. An injured guard tells Ernest to relax. An unnamed girl goes to Twitter to tweet about what’s happening. A confused Nancy asks what all that is and the girl reveals that she is no longer in 1985 she was before. Nancy suffocates Lucifer, demanding to be sent back to 1985. Lucifer reveals that time in Hell is much slower than on Earth. Janet manages to pull off Nancy while a Satanist prisoner approaches calling Lucifer to be false. Lucifer tells him that Satan is what humanity thinks, and that he knows about the cruel things he has done. He offers him a chance in redemption and Howard asks if he can redeem the 11 death row cons.

Ernest pulls Nancy from the crowd and believes that Lucifer is a lie until he sees Lucifier redeem the other prisoner. One hugs Lucifer as he is heartfelt by his faith. An angel appears before them searching for Lucifer. Lucifer answers the call and the angel, Sandalphon, asks for Lucifer’s help as she believes that he was right. Sandalphon explains that Earth is lost and that Humans don’t matter. Lucifer refuses, stating that doing so would go against God. Nancy kicks her and she becomes angry. She plays her harp the sound waves slices the people in the vicinity. Nancy uses the chance to cut off her hands while the other unload their bullets on to her. More angels appear including Gabrielle and Nanael. Gabrielle offers Lucifer another chance but he turns it down, saying that it’s against God. Gabrielle comments that “God is dead”, stressing him out. A girl reveals from her cellphone that they will release nukes upon San Diego and that they have less than an hour to leave. Macabre appears before them, saying that they can’t blow up Earth.

Retrieved from "https://imagecomics.fandom.com/wiki/Nancy_in_Hell_on_Earth_Vol_1_2?oldid=41273"
Community content is available under CC-BY-SA unless otherwise noted.