Edit this page
Servant of the Vampire 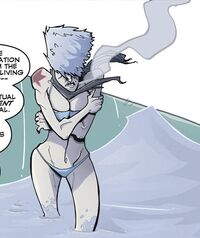 Natasha was a servant of the Vampire. She was stationed in Gardner-Kvashennaya as a spy to watch the scientists researching Altilis-738. When the U.S. Food and Drug Administration raided the facility she destroyed the evidence and murdered the scientists. She ultimately met her doom by running away into the snow without enough clothing.[1]