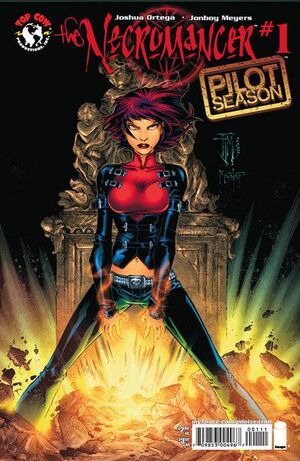 Appearing in "About a Girl"

Plot Synopsis for "About a Girl"

Another Pilot Season book to make the decision harder. Poor Abigail, she got the short end of the stick when super powers were handed out. She sees dead people...really.

After the tragic and haunting events of The Necromancer Book I: Something In The Way, Abby van Alstine revisits her past, learns more about her strange connection to the Dark Age demon Mali, and encounters a monstrous creature that threatens to consumer her with its sickly evil. Original series writer Joshua Ortega (Frank Frazetta's Death Dealer, Star Wars) returns to his Harvey nominated co-creation alongside cover artist Francis Manapul (Witchblade, Iron & The Maiden) with interior art by breakout talent Jonboy Meyers (Danger Girl, Ninja Scroll), and a surprise ending that will have fans clamoring for more Necromancer!

Retrieved from "https://imagecomics.fandom.com/wiki/Necromancer:_Pilot_Season_Vol_1_1?oldid=46427"
Community content is available under CC-BY-SA unless otherwise noted.