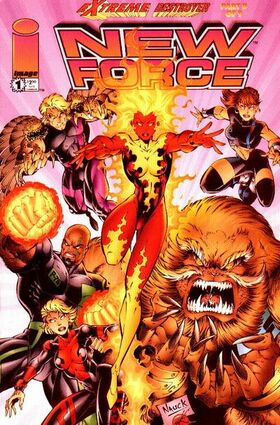 Dusk, Exit, Narcisse, and Reign squabble with each other as they survey the wreckage of a crashed Keep ship.  In their cell on a Keep vessel, the other New Men try to talk Byrd out of staying with the Keep.  New Guard member Sundance watches them and ponders her own life choices until the Shepherd enters looking for Dash.  Meanwhile, Black Jack tells Dash not to trust the Shepherd and exposes his own disfigured face as a warning of what can happen.  On Earth, Elemental materializes amidst Reign’s group.  Reign attacks him, demanding to know where the others are, but Elemental does not know and teleports away.  Reign then asks Exit to transport them to their teammates.  Aboard the Keep ship, the New Guard comes to take Bootleg for branding, but the Shepherd intervenes and demands to know where Dash is.  In a flash of light, Exit teleports Reign’s group in, and they assault the New Guard.  Deducing that Dash is with Black Jack, the Shepherd takes off after her.  At the Pentagon, Alan Keever and Vanguard’s robot Wally observe the members of Bloodpool, Knightstrike, and Youngblood return to Earth with their allies.  On the Keep mother ship, Quantum attacks the Keep’s leader, the hooded Communion.  The Shepherd flies though the Keep vessel’s corridors until he is stopped by an energy blast.  He looks up to see Dash holding his powered staff.