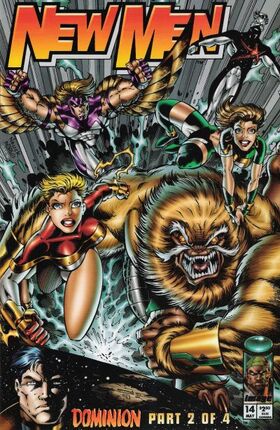 Kodiak had just pranked Dash, and Byrd was waiting for Jamie to get out of the shower when Dominion’s troops abducted them from the team’s lodge.  Dominion realizes his men failed to capture all the New Men just before he learns the team has escaped.  Outside, the New Men grab onto each other while Byrd slows their fall. Kodiak panics, shifts into his ursine form, and falls to the ground.  Unhurt, he crawls to his feet and is approached by someone he recognizes.  In the present, Elemental teleports to the University of Washington and finds the Genesis Pods.  They are in the lab of a scientist whose murder the police are investigating.  After the police leave, a faceless creature breaks out of a pod and attacks the janitor. In the asteroid, Reign deduces that Khyber has been resurrected by the Brotherhood of Man and sent to kill the team.  Jamie, Byrd, and Dash land in a post-apocalyptic landscape with no sign of Kodiak.  Suddenly, Byrd is knocked over by Brewer’s Groot who is running from Wildstar. The New Men help Wildstar subdue Brewer’s Groot and explain they are from the past.  Something explodes, and Wildstar tells them to run.  They leave, resolving to find Kodiak and a way home.  In Seattle, Girth finds the ruins of Proctor’s house.  Aboard the asteroid, Khyber knocks out Proctor and takes Reign’s gem. At the lodge, the lurker finds Paul passed out and badly wounded.  He determines there is a way to save Paul and prepares to bite the man with his vampire fangs.