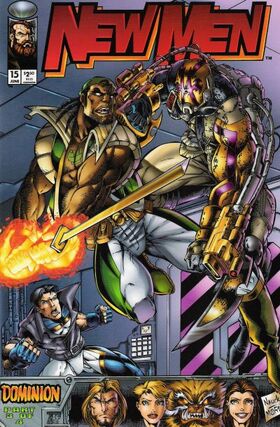 Appearing in "Dominion part 3: This is a Low"

Plot Synopsis for "Dominion part 3: This is a Low"

As he runs through the corridors of the asteroid, Proctor recalls discovering his superhuman healing ability when he was young.  Khyber finds him and attacks while Pilot and Reign trace Khyber’s path of destruction.  In the future, Byrd, Dash, and Jamie reach a town and ask about Kodiak.  One of the locals takes them to the Time Guild where Kodiak is with an older version of Pastime.  Pastime gets them fresh versions of their costumes based on historical records, including Jamie who learns her codename is Bootleg.  In present-day Seattle, Fowles finds the lab janitor dead and deduces a connection with the Genesis Pods.  Elsewhere, Black Jack explains to Elemental that the Nameless Ones, the faceless humanoids from the pods, were developed as disposable host bodies for Dominion.  Pilot and Reign battle Khyber as Proctor remembers fighting the Brotherhood of Man with the original New Men.  Pilot blasts Reign’s gem away from Khyber, and Proctor recovers it.  In the future, an aide informs Dominion they can time travel to the present to obtain the Genesis Pods.  The rest of the team learns from Pastime that they disappear battling the Keep, the aliens who created the Nu-Gene.  Pastime cannot return them to their proper time, but Skylark appears and says she can.  She begins the process, telling them to close their eyes and think pleasant thoughts.