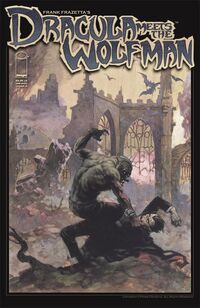 Nicholae Bulinski was a werewolf who lived in the nation of Moldavia in the mid-nineteenth century. He was in love with a local peasant girl named Marta. In 1849, Nicholae watched his lover as she returned to her cottage early one evening. He tried to go after her, but realized only too late that the full moon had risen; he was transformed into a werewolf. Even as a beast Nicholae could not bring himself to risk harming his beloved Marta, so he dashed off into the forests.

Meanwhile, Marta's mother arranged for her to visit Castle Peles, the temporary haven of a visiting count. When she arrived she discovered to her horror that the count was actually the vampire known as Dracula. Bulinski tracked his lover to Dracula's keep and found them just as Dracula was readying himself to drink Marta's blood.

He leapt at Dracula and a savage battle ensued. The Wolfman maintained the upper hand and their fight carried out into the courtyard near the cliff's edge. Dracula managed to gain an advantage over the Wolfman and used it to grip him firmly about the throat. Marta appeared behind them and tried to impale the vampire with a broken weather vane. Dracula lashed out at her, and she fell backwards, impaling herself on an upturned piece of wood. She died moments later. Dracula turned before the Wolfman could react and kicked him over the edge of the cliff.

The Wolfman survived the fall, but little is known of what transpired next. It is known that the Wolfman lived well into the modern era and had at least one more encounter with Count Dracula. The results of this confrontation remain inconclusive.

Retrieved from "https://imagecomics.fandom.com/wiki/Nicholae_Bulinski?oldid=49783"
Community content is available under CC-BY-SA unless otherwise noted.