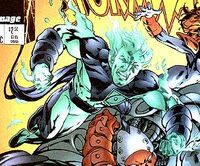 Nigel Keane, also known as Hellstrike, is a comic book superhero in the Stormwatch series, first appearing in Stormwatch #1. He possesses the ability to project plasma as destructive bolts or as an energy stream to allow himself to fly. As of Issue #12, he also has to live inside a containment suit similar to Fuji's.

Nigel was born Irish in Belfast. He served in the British police constabulary in Belfast for some years before moving to London. There, he fell in love with Anne, his partner while investigating the IRA. Their relationship lasted until an Irish terrorist/mercenary by the name of Seamus O'Brien, killed her in front of him. In the ensuing fight, Keane was mortally wounded. But before dying, his powers manifested, saving his life and making him Hellstrike. O'Brien later became the villain Deathtrap, leader of the MERCs, a mercenary unit of super powered beings. Hellstrike bears a long grudge against Deathtrap for both this and Anne's murder.

Nigel joined StormWatch One, the main team of superheroes serving the UN. In the Wildstorm universe, the UN is secretly a menacing worldwide conspiracy led by gun-toting, paranoid "Secret Masters". While they are heroes, the operatives of StormWatch are quite ruthless and do not hesitate to violate the rights of a country in order to advance the agenda of the UN.

After a battle against Deathtrap, Hellstrike was severely injured, fell into a coma and his neural circuitry began to fall apart. His body started to lose cohesion and broke into pure energy in a tremendous explosion that ruined Skywatch's sickbay. At this time, Nigel decided to give up his life. Then, Fuji contacted him in his comatose state and persuaded him that his life was still worth something, with Fuji using himself as an example. With the help of StormWatch engineering genius Link, Nigel received a tailor made containment suit, much like Fuji's, except that Fuji's gives him the control of his own density and avoids radioactive gas leaks, while Hellstrike's acts as a force field preventing him from exploding.

At some point, he began a relationship with Fahrenheit that they kept secret until Weatherman Battalion found out - it was contrary to regulations about fraternization between field officers. Battalion had to break into Hellstrike's quarters because neither he nor Lauren were responding to the radio calls. After scolding them for their irresponsibility, Battalion abolished the regulations against fraternization, but warned them to not forget their duty for it.

Hellstrike was one of the four officers that died in the Aliens infestation. Hellstrike was killed when his containment suit was destroyed during an attack by Xenomorphs on Skywatch in the WildC.A.T.s/Aliens crossover, along with Fahrenheit, Fuji, and others.

Hellstrike will have a supporting role in the new Stormwatch series written by Christos Gage. It is revealed that The Doctor was able to bring him back after the events of Worldstorm.

Retrieved from "https://imagecomics.fandom.com/wiki/Nigel_Keane?oldid=65414"
Community content is available under CC-BY-SA unless otherwise noted.