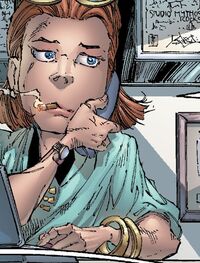 Nikki Hancock worked for a local news station in New York City. She received a call from an informant that he had footage of a man in a red cape pulling people from a recent plane crash.[1] When she attempted to pickup the tape, she found the man dead, and Spawn standing in the room. She was terrified and offered him all the information she had which was not much.[2]

Retrieved from "https://imagecomics.fandom.com/wiki/Nikki_Hancock?oldid=37398"
Community content is available under CC-BY-SA unless otherwise noted.