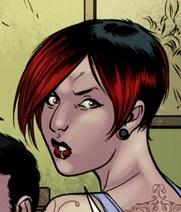 Nikki Jensen is the free-mouthed stripper girlfriend of Derek Hilch.

To let him continue his art pursuit, she let him tattoo her. At the same time, the Checks were moving into Derek's shed and noticed Nikki in the home.[1]

Later, Nikki was baby sitting Cooper when he stumbled into the shed where the Checks were chopping up body parts to sell on the black market. She was taken into the shed as well and held captive.[2]

Later, May Tao headed to the strip club where she interviewed a stripper who was a past girlfriend of Anthony Check. She told May that Anthony was working in Derek's shed for a while and then pointed Nikki Jensen out when she walked into the building. Nikki ran out of the club.[4]

Retrieved from "https://imagecomics.fandom.com/wiki/Nikki_Jensen_(Revival)?oldid=61988"
Community content is available under CC-BY-SA unless otherwise noted.