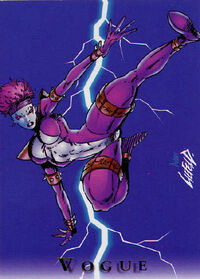 Nikola Voganova was forced to leave a pampered life in Russia at the age of 13 when she witnessed her father being killed by Alexander Stroika of the KGB. She was already at that time a world-class gymnast. At age 18 she was accepted into the Bloodpool program and shortly before her twentieth birthday she became a member of Youngblood.

Some time after having established herself in Youngblood, Vogue started an international cosmetics corporation, Vogue Cosmetics, using her fame to spearhead the launch.

Vogue eventually returned to Russia where she met her mother and brother, who had become a part of the Redblood program, and got her revenge on Alexander Stroika.

After the death of Riptide and the discontinuation of Youngblood, Vogue returned home to Russia.