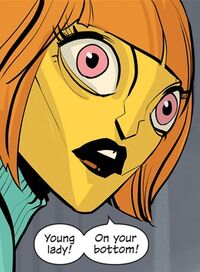 Noreen is a school teacher. Her school is guarded by Landfall Coalition members and recently had Hazel transfer into her class.[1]

Over the next few years, Noreen and Hazel grew very close. Noreen noticed that while all the other children had memories and stories of war and death, Hazel was frequently very happy, though lewd in her humor. He grew to favor Hazel and even brought her cupcakes for her birthday when she knew she was not supposed to.[2]

Eventually, Hazel had enough with keeping her hybrid nature a secret. When Noreen told her she could say anything to her, Hazel took the moment and revealed her wings to her. Noreen passed out from the surprising news and bashed her head on a table, bleeding out on the floor.[2] Petrichor soon walked by and saw what had happened. She took pity on Hazel thinking she had been the product of a rape since she was cross-species. She told Hazel to cover up and helped fake that Noreen had fallen and hit her head. Later, Hazel visited Noreen and gave her a book to feel better. Noreen smiled at Hazel's generosity. Later, Noreen approached Hazel and told her she'd help her escape as she would be in big trouble if her secret about her wings got out.[3]

Retrieved from "https://imagecomics.fandom.com/wiki/Noreen_(Saga)?oldid=60217"
Community content is available under CC-BY-SA unless otherwise noted.