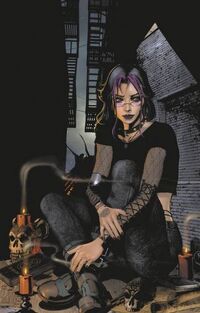 Nyx is a witch practitioner with a good heart. She was easily lead astray and attempted to help Spawn.

Nyx grew up as Carrie Anne on Long Island, New York. She lost her mother when she was two-years old and had no other siblings to grow up with. She began experimenting with magic at the age of eight and achieved success in ways she could not understand. She gave herself the nickname of Nyx.

She later started a covenant with her friends Lily and Thea. Lily left due to discovering boys, but Thea's life spiraled out of control with her understanding of magic until she ultimately took her own life leaving Nyx alone once more.[1]

Helping Al and his Shadow

As a grown-up still practicing magic, Nyx sensed a soul who had been separated from his shadow. She tracked Albert Simmons to the Bowery Alleyways. He had his powers taken from him and was wandering the streets in fear and confusion.[2] Nyx then came to him and helped him regain his powers with her Silver-White Moon Blade and Shadow Thread. However, she kept a shred of the threat for herself so that she may maintain control over him without him knowing.[3]

Over time, Nyx explained the rules of Greenworld to Al. She informed him it would give back three-fold what you give and convinced Spawn to begin giving back to the world.[4]

Later, Nyx was up late one night. Spawn had been sensing an evil presence as well. Nyx sneaked out of bed to create a location spell circle. As she entered her dream state, Mammon came to her in the dream. He reminded her of her past and her two witch friends as a child. He informed her that Thea's soul now belonged to him and when she was ready, she could come to him for an exchange.[5]

The next day, Nyx asked Al what hell was truly like. Since he couldn't explain it with words, he showed her with his powers. After writhing in pain and contorting her body, she was released and realized the torture of hell and what people in hell go through. Later that night, she went to the park to barter with Mammon to release her friend's soul from hell.[6]

Later, Nyx tracks down Lillian Redgrave to her new job at a rescue mission in New Jersey. They talked about the loss of Thea. Nyx asked for Lily's help in freeing Thea and Lily refused. Lily told her that she had become a much different person and refused to look back on that part of her life. She told Nyx that if Thea got herself into the mess, she deserved to be stuck in hell and ushered Nyx out of her office.[7]

Nyx pondered Mammon's offer. She knew she can only save one of her friends, either Thea who's soul is trapped in hell, or Spawn's soul. She attempted to feel Spawn's presence but could not locate him.[8]

Deciding she couldn't betray either friend, Nyx struck a deal with the demon lord, N'Zzezheaal, to enter Hell and return with one soul. She planned to retrieve Thea's soul and return with her. She used her powers to absorb Al Simmons's suit into her Shadow Thread. She then donned the suit and entered hell to find her friend's soul.

When the Redeemer sensed the hellspawn suit, he immediately moved to attack. However, after being over powered he learned Nyx was searching for a friend and agreed to help if she helped him escape hell. She agreed, but lied as she knew she could only save one which she had planned on Thea.[9]

They later found Thea's soul but were asked to leave her be. Thea knew her body was dust and bones and she could not return to earth. Instead, she asked to be freed and the Redeemer gave Nyx his sword so that she could destroy her soul and release her from eternal torment. In return, Nyx returned to earth and brought the Redeemer with her.[10]

Upon returning, the hell-lord N'Zzezheaal returned to reclaim his end of the bargain. She relinquished her powers and control over Spawn to him. The lord transforms revealing he was truly Mammon in disguise. He explains it was all a ruse to get the power of Spawn, his ultimate goal.[11]

Nyx informed her of her encounter with Spawn and what she did to him. Nyx then decided search for the faux Houngan who might restore her powers. Suzanne warned her of him, but Nyx still decided to go meet him.

When she arrived at his home, Houngan demonstrated her his possession with Zera's head. Nyx planned that if he didn't restore her powers then she would commit suicide. Sensing danger, Suzanne summoned Spawn to help her. Once Spawn arrived to help her, Zera possessed Nyx and used her to kill the Houngan.

Zera set her sights on Spawn to get revenge for decapitating her. Using Nyx, she punctured Spawn with her sword. The possessed Nyx was about to give the finishing blow when Suzanne arrived. She broke the head out of the jar and fed it to the demon dogs that has been chasing Nyx earlier.

Mammon had been watching the fight. He returned Nyx's powers, saying he no longer needed her power. Mammon disappeared, and Nyx asked Spawn if he come to kill her. However, Spawn forgave her instead.

Retrieved from "https://imagecomics.fandom.com/wiki/Nyx?oldid=66910"
Community content is available under CC-BY-SA unless otherwise noted.