Start a Wiki
One Eye Wyatt 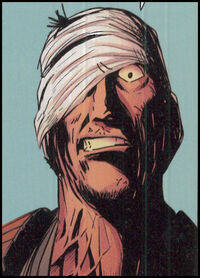 One Eye Wyatt was one of four bounty hunters sent out by Tracker to find and kill Babylon, the son of Death. The other three sent out with him are Psalm 137, Billy Blackgun and Ursula Lock.

One Eye Wyatt was later killed by Psalm 137.

Retrieved from "https://imagecomics.fandom.com/wiki/One_Eye_Wyatt_(East_of_West)?oldid=61739"
Community content is available under CC-BY-SA unless otherwise noted.